After a great festival run including Slamdance, CPH: DOX, Sheffield International Doc Fest and many more Desolation Center starts the next step of its journey today with the launch of a 30+ city theatrical release.   It hits Los Angeles this week and then onward across the US and Canada.

I have been advising and working Stuart Swezey on this remarkable film since the beginning – even contributing some footage from my early Mark Pauline/Survival Research Laboratories documentaries.    The film plays exceptionally well in theaters and Stuart has been creating a number of events with musicians around the release such as the Rooftop Films screening in NYC featuring Lee Ranaldo of Sonic Youth.   Check out the trailer here.

From the LA Times: “In the early 1980s, fed up with the violence that Daryl Gates’ LAPD brought down on the flourishing Hollywood punk scene, Stuart Swezey took to the warehouse wasteland of downtown L.A., and then to the wide-open spaces of the desert, booking punk, noise, industrial music and experimental art shows under the moniker “Desolation Center.” His first venture featured San Pedro punkers Minutemen, $12 tickets and a school bus ride to the Mojave. No one could have known that this event would be the first DNA strand of the multibillion-dollar modern music festival, as chronicled in Swezey’s documentary “Desolation Center.”

Swezey’s film is a historical record of this short-lived time and this singularly L.A. scene — he promoted only three desert shows and one on a boat. The era ended with the death of Minutemen guitarist D. Boon in 1985, but it means that Swezey never sold out. Though the “Desolation Center” served as inspiration for the massive festivals of today, in the hearts and minds of the scene’s major figures, it remains pure to the punk ethos.” 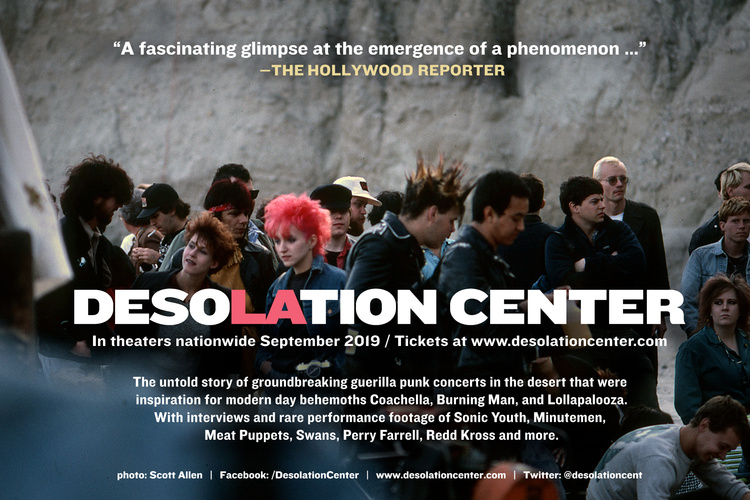