Earlier this month I was lucky enough to travel to Romania with the American Film Showcase which is a collaboration between the American State Department and USC which bring mainly documentary filmmakers and film experts (yours truly) to various countries around the world. This program serves as bridge between American filmmakers and filmmakers abroad mostly in the developing world but occasionally in more developed countries.   Frankly I didn’t know what to expect – I actually thought that Romania already had a pretty amazing film industry producing some pretty incredible films.  However my one experience being in Romania (before the revolution) did not create much of a desire to go back.  Boy was I surprised – Romania is an incredible gem in many ways – the people are warm and generous (and speak English better than most European countries), there are a plethora of amazing Greek Orthodox churches (I’m a sucker for architecture, mosaics and any images on walls as you may know), and there is a huge vibrant section of artists who are eager to embrace the new entrepreneurial world.

On the trip I was joined by the incredible filmmaker Timothy Wheeler, (Poached and The Other Shore), and Alex Ago, the Director of Programming and Special Projects at the USC who was a fount of information about Romanian cinema (and film history and contemporary filmmakers in general). Special shout out to the Romanian Embassy staff and AFS staff who were wonderfully supportive. 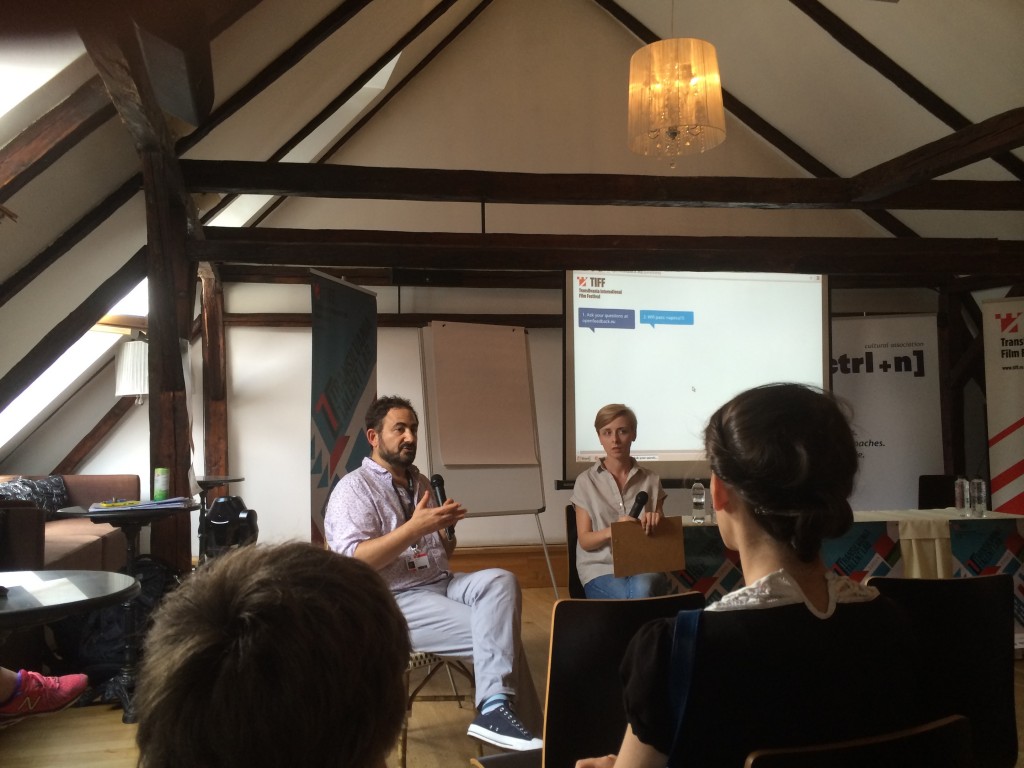 Our first days were spent in Bucharest. We did several radio and TV interviews, and held film workshops for more experience filmmakers and a separate workshop of high school students. The latter was one of the most fun workshops I have done – about half of the class was interested in a career in some form of art – film, art, photography, and crafts – and was curious as to how that might happen for them. I firmly believe that nearly anything relating to film distribution and marketing can be applied to most every art form. I was surprised how engaged they were in learning about alternative distribution and marketing tools at such a young age.

Alex introduced us to the incredible Romanian actress Maria Dinulescu(of California Dreamin’, Hooked, et al fame). She proved to be an incredible guide taking us to the more off the beaten track Bucharest coffee shops and bars (if you go I highly recommend Eden (Jamaica in Romania)).

That afternoon we had a lively discussion with several seasoned filmmakers and prominent faculty from the National University of Cinematographic and Theatrical Arts as well as the University Hyperion. The faculty were very interested in learning more about the new landscape of film distribution and marketing – and have realized 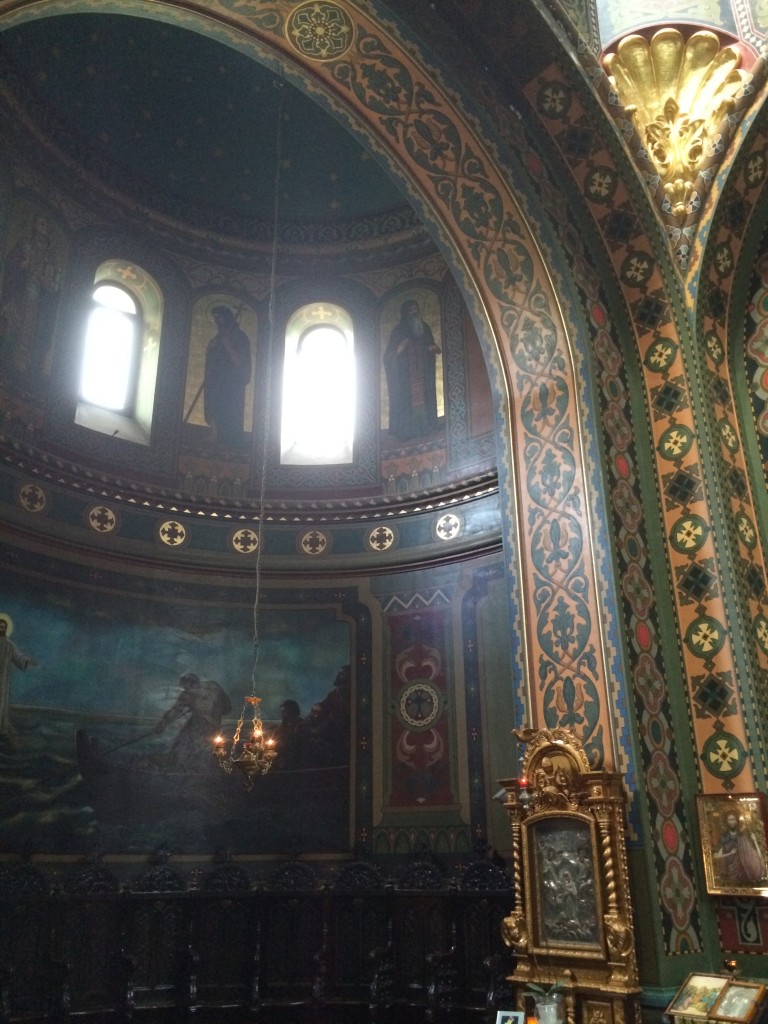 that they should be teaching it in their schools.   However there were several that complained about the lack of markets for Romanian film, and really pressed us on how the Americans have it much better than they do. I think they were surprised when I compared their situation to that of American independent filmmakers. While we of course have a much larger market, they didn’t know that except for the films made by the studios (the number which has declined drastically in recent years), or those acquired by larger distribution entities, these American independents really do have to struggle with finding and engaging audiences and getting their films seen by those audiences. I think this was one of the key moments of cultural exchange: the Romanian filmmakers thought they were alone (with other small countries) in getting their work out to an audience – but they were surprised to find that American artists struggle with this as well.

Many Romanian filmmakers throughout our trip commented on how small the Romanian market is and how hard it was now for filmmakers after the revolution. Not that anyone would go back to those times, but before the revolution the state made many more films than are made now in Romania and these films were usually in Russian so they could be distributed throughout the Soviet Union – to a much larger audience than Romania. 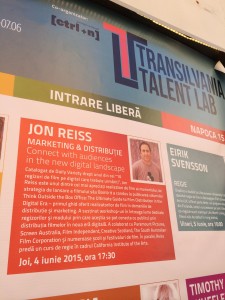 After the revolution they make their films in Romanian, and hence are only distributed in Romania, unless they either win at Cannes and then receive global distribution or the director has received major acclaim in the past. I encouraged the filmmakers as much as possible to try to find their global audience (which will be harder because of language) but if no matter where you are from, a piece of art can still resonate with people in other countries (setting aside a decent budget for subtitles could be a good idea though). One advantage that many Romanian filmmakers have is that they are fluent in a number of languages especially English which gives them an edge in communicating with the global English speaking audience – as well as the potential of making films in English if they desire.

After Bucharest, we headed to Cluj to the Transylvania International Film Festival (which I highly recommend – great fun and they treat filmmakers really well). First up was a plein air screening of Tim’s film, The Other Shore, which I loved.

It was in Cluj where I found the most receptive filmmaker audience for new concepts of distribution and marketing. They knew that the old system was broken – and were ready to embrace a combination of hybrid options for engaging with audiences. The Transylvania Talent Lab brings filmmakers from a variety of countries from Eastern Europe and surrounding areas. 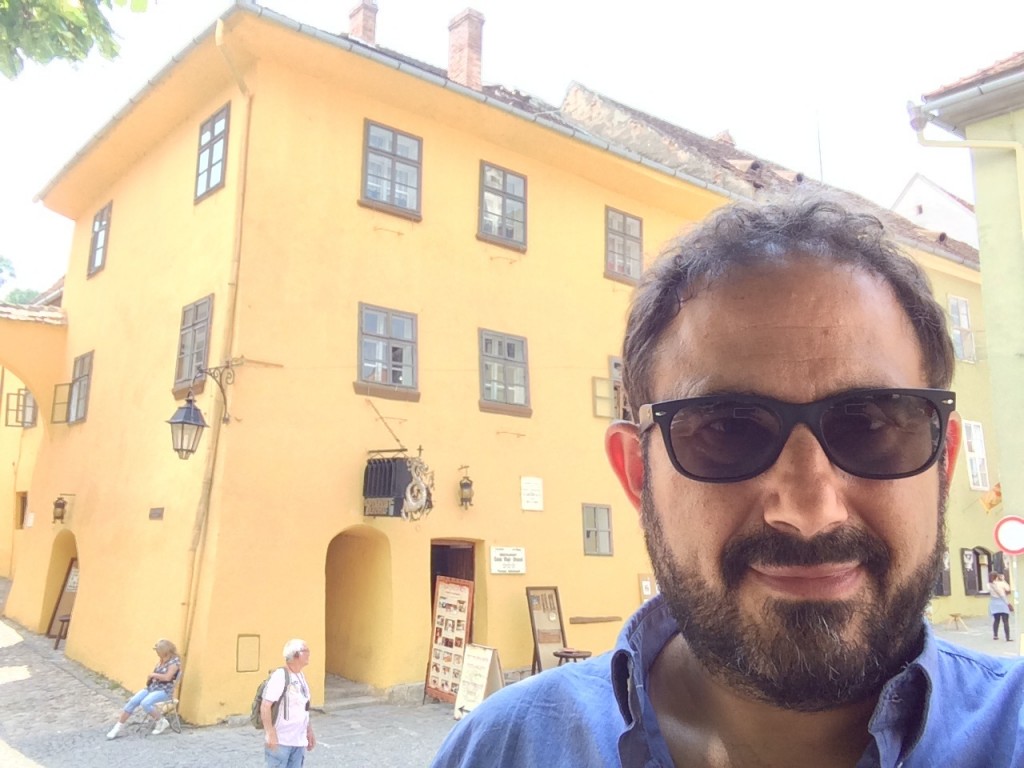 Along with holding workshops and master classes, we were also fortunate enough to take in some of the culture of the country. In Bucharest, I dragged Tim and Alex to about twenty Greek Orthodox churches and we stopped off at Vlad the Impaler’s birthplace in Sighisoara on the way to Cluj. While Vlad’s home was decked out in Vampire kitsch the little wooden statues on the clock tower were an uncanny treat. On our last night got to attend an opera recital in the Romanian Athenaeum with Maria, one of the most spectacular concert halls I’ve ever seen. I’m looking forward to going back!