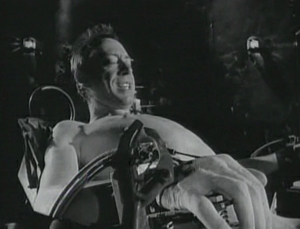 We discussed the video in the back house of the former Sharon Tate estate (where we shot another video together for the song “Gave Up”).  I proposed loosely basing the video on the French decadent writer Octave Mirabeux’s The Torture Garden in which wealthy people visit Chinese prisons to witness gruesome tortures.  But what struck me and what I borrowed for the video was the symbiotic relationship between the torture and the lush plants that were fertilized by its awful results.   Inspired by my work with SRL, I decided to update the story making the ritualized relationship between a man and a machine.   I also made this tortuous relationship purely voluntary – so that the men were giving themselves to this process, ritual, transcendence.

I felt it had to be in black and white because color would make it too real and remove the feeling of allegory I wanted.  I also definitely wanted the lead to be a man so that it could help dispel any sense that it was a typical horror film.

I always wanted to cast my friend Bob Flanegan as the lead as an artist and self described “SuperMasochist” he also had the perfect body – molded by years of struggle with cystic fibrosis.   I was concerned he might be too sick – but he eagerly jumped into the role.  I think the video would have been totally different without Bob’s incredible performance where we as an audience are unclear whether it is pain, pleasure or both.   One day on the set his mistress/wife/partner Sheri Rose was not available, so I was left to operate the device that pulled on Bob’s testicles.  I have the distinct pleasure of having made Sheri jealous.

We had a feeling that people were not going to be happy with the piece.  We heard MTV was furious since they were eagerly awaiting Trent’s new video from his new label and this video was basically a Fuck You to the industry.  I heard his label freaked out as well – but then took the credit for what a brilliant marketing move it was!   It went viral on VHS cassette throughout the industry – this is in 1992 – well before the prevalence of the internet and certainly before video could be shared effectively on the internet.    It was screened on Much Music (the Canadian MTV) on a special program on censorship and the programmer got fired the next day.

It caused a shit storm and Trent and I were both happy that it caused such a reaction. What more could we want? The piece seems to have some legs popping up on lists for most outrageous/banned/horrifying/etc music video ever.  Twenty years later – because of the creative freedom we had – that Trent gave me – its one of the purest artistic expressions that I have ever created – and one that I am incredibly proud of.   There still is a seven minute version – that is just the short film component – without Trent singing – that has yet to be released.  I still have the master of this version in my closet.  Here’s hoping that Trent will put a soundtrack to it and release it some day!

One Response to A Little About Happiness In Slavery