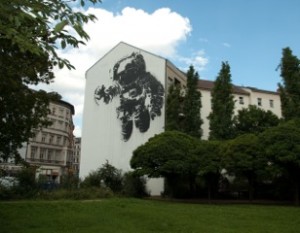 BOMB IT 2 Artist Victor Ash just might embody artistic evolution. Bursting onto the graffiti scene in the early 1980s, he went by Ash2 and Saho, and ran with the popular Parisian crew, BBC. He has since expanded his style, focusing on large- scale murals involving themes of human nature and perception. We caught up with Ash amidst his busy schedule, where he briefed us on his latest projects, his artistic transition, and themes that inspire his work.

If you like what you see, head over to our Bomb It 2 Kickstarter campaign to learn more about this project and ways you can contribute!

BOMB IT: What have you been up to since we filmed you in Bomb IT 2?

BI: Can you talk about your recent works? What kinds of themes are you exploring with them?

VA: Since last year I have been working mostly with the theme of “animals faces,” playing with the idea of the animals looking at the viewer and the viewer looking back, I try to symbolize the human interactions we have with nature and nature with humans. 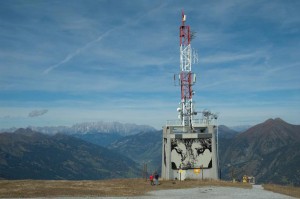 BI: There’s a lot of incrimination of graffiti and street artists in the news. As you’ve matured as an artist, do you feel your stance on graffiti and public space has changed? Why or why not?

VA: I started to paint outside when I was a teen. Looking for an identity, I liked the thrill the revolt and the energy I found there. Also, I like to be in direct contact with the public, it creates a communication that you wouldn’t get by staying in a studio. Now I’m not active illegally in the streets because what I do is too big and takes too long to do but I still paint in the streets, just not illegally.. I understand why others keep on doing it, but personally I find challenges elsewhere and getting responsibilities like having children and family forces you to work and think in other ways. 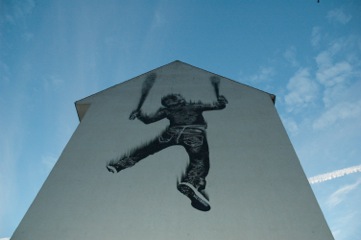 BI: What recent or current events have inspired your work?

VA: Many things happening are worth commenting on. I get most of my inspiration from the information I received about the current state of the world, my work has to reflect the time we are living, and getting informed about the world is important for my themes.

BI:  What inspired the change in your work?

VA: In the 80’s I was a teen, focusing in the aesthetics of graffiti, it was great, but after some years I realized that it was not enough just doing letters and characters for me to keep interested in painting and I had to look further in my development to keep it exciting. 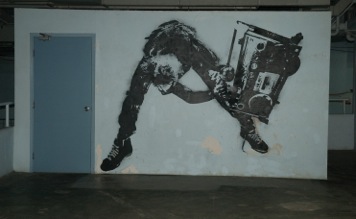 BI: What have been some public responses to your current street art and murals?

VA: In general the response is positive, if it was always negative I would do something else with my life.

BI: What advice or insight would you give to emerging street and graffiti artists?

VA: Keep on doing it as long as it matters for you and others. 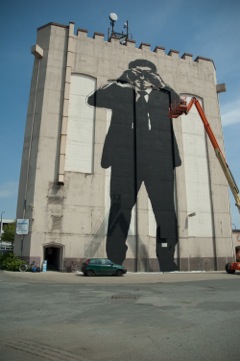 If you’re lucky enough to be in the Netherlands, don’t miss the upcoming screening of Bomb It at the International Film Fest Breda!

Bomb It! will be featured at the Scope Art Fair tomorrow, March 8, screening from 2-4 pm, and I will be speaking on the panel that follows on Street Art in Transition.

Be sure to come check it out – Scope is the largest Art Fair in the world – more information here.

Bomb It! at the University of North Texas

Bomb It! will be showing at the upcoming graffiti exhibition at the University of North Texas at 6 p.m., March 10, in the Visual Resource Center, Room 224 in the UNT Art Building. Here is more info on the entire event —

What: Graff, Tag and Bomb: The Influence of Graffiti — An exhibition of graffiti-influenced art presented by the University of North Texas College of Visual Arts and Design. Sour Grapes, a group of Oak Cliff-based graffiti artists, will create a graffiti mural outside the UNT Art Building as part of the exhibition.

When/Where: Exhibition dates: March 3 (Tuesday) – March 28 (Saturday) in the UNT Art Gallery in the UNT Art Building, one block west of Mulberry and Welch streets. Gallery hours: Noon to 8 p.m. Tuesday and Wednesday and noon to 5 p.m. Thursday through Saturday.

DENTON (UNT), Texas — Graffiti doesn’t just exist in shadowy underpasses and on sides of buildings. Professional artists are incorporating the techniques and look of graffiti in their gallery artwork, as seen this March in a University of North Texas art exhibition that will include a group of Oak Cliff-based graffiti artists creating an outdoor mural.

The UNT College of Visual Arts and Design presents Graff, Tag and Bomb: The Influence of Graffiti, an exhibition that shows how street art influences gallery art. The exhibition explores the difference between street graffiti and a more practiced, evolved kind of graffiti-inspired gallery art, said Victoria DeCuir, assistant director of the UNT Art Gallery, organizer of the exhibition and a former graffiti artist herself.

“Graffiti artists aren’t just a bunch of hoodlum vandals,” DeCuir said. “When you’re dealing with quality graffiti, artists use a lot of aesthetic thoughtfulness, and we’re highlighting that inherent thoughtfulness using four artists as examples by showcasing their gallery work.”

The four artists navigate a balance between high and low culture and an art practice deemed simultaneously illegitimate and marketable, DeCuir said.

“I used to make graffiti art myself when I was a teen-ager,” DeCuir said. “I would do horses and cats — the kinds of things that 14-year-old girls like to draw. It’s no coincidence that I ended up studying and devoting my life to visual culture and art in particular. At the time, we were just doing what we liked to do, and we weren’t thinking of it as some sort of future in fine art, but it does draw along the trajectory in many of our lives. Now, I want to educate people about the difference between rudimentary line tagging and a more elaborate, thought-out process.”

Sour Grapes, an Oak Cliff-based graffiti crew, will use its graffiti skills to paint a double-sided temporary wall — about 40 feet wide and 10 feet tall — at noon March 7 (Saturday) outside the UNT Art Building. The painting process, which is expected to take about eight to 10 hours, will be videotaped for later viewing inside the exhibition.

In conjunction with the exhibition, two films about graffiti art will be shown. The independent documentary “Bomb It,” directed by John Reiss, shows interviews with international graffiti artists who tell of the history, influence and lasting impact of graffiti as an art medium and cultural phenomenon. “Bomb It” will be shown at 6 p.m. March 10 (Tuesday) in the Visual Resource Center (Room 224) in the Art Building.

The second film,” Bomb the System,” shows a romanticized Hollywood portrait of an outlaw graffiti artist torn between a future in fine art and the streets of New York City. The film will be shown at 6 p.m. March 24 (Tuesday) in the Visual Resource Center.

Sponsors of the exhibition include Sherwin-Williams in Denton and Rec Shop in Dallas.

UNT Art Gallery hours are noon to 8 p.m. Tuesday and Wednesday and noon to 5 p.m. Thursday through Saturday.

Just wanted to share some exciting news – I will be screening “Bomb It” and speaking at a panel discussion about “Street Art in Transition” at the Scope Art Fair in March. Scope is the largest and most global art fair in the world featuring emerging contemporary art with 7 markets worldwide.

“Bomb It!” will screen on Sunday, March 8th, from 2-4 pm and I will be a featured speaker on the panelist that follows at 4 pm. Some of the other panelists will be : Pedro Alonzo, Independent Curator, Ron English, Steve Powers (aka ESPO), artist, and Marc and Sara Schiller, of the Wooster Collective. It is sure to be a great event. If you are in the big city, don’t miss this–

If you’re in Pittsburgh, check it out –

The Free Library of Philadelphia!
Wednesday, February 25th at 7:00 p.m.