Is It Crazy to Film NGOs in Africa and Run a Kickstarter at the Same Time? 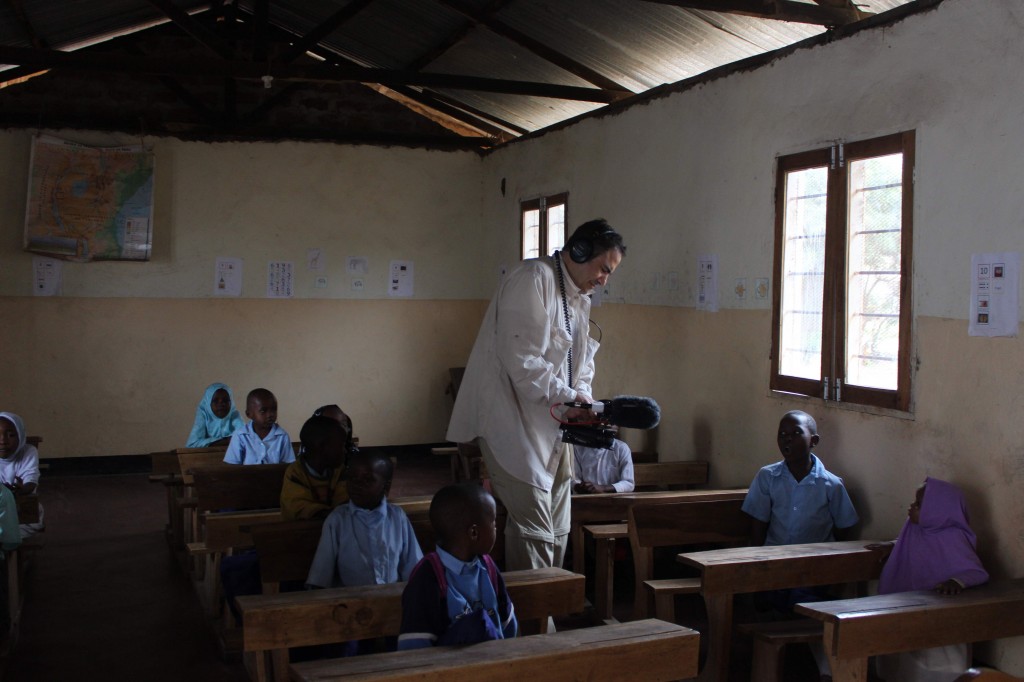 I just arrived in South Africa on my way from filming in Tanzania to speak at the Durban Film Festival.  I know it’s crazy to do this while running a Kickstarter for Bomb It 2 – and prepping the release of Bomb It 2 on August 6th – but I ultimately realized that if I waited for the right month where I wasn’t doing anything – I would never find the right time.  I think it’s the case for most filmmakers who are trying to finish their films or approaching release and running Kickstarter – but perhaps shooting in Africa might be a bit more extreme.   Two tips:  Assemble a great team and get no sleep.

The projects I have been shooting are pretty incredible.  First is a primary school called Africa Schoolhouse (which is also the name of the umbrella organization).  They are involved in 2 schools in remote village of Ntulya, Tanzania near Mwanza.  There was one solar powered outlet to charge my batteries and an intermittent AirTell Cell Card to get out at dial up speeds.  While there I was also filming for the Go Campaign which works with grassroots projects throughout the developing world focused on helping women and children at risk – helping them develop healthier, safer and sustainable lives.  Go Campaign partnered with Africa Schoolhouse to build a well and a clinic providing clean water and health care to the surrounding villages that formally had to travel many extra kilometers by foot or if lucky by bicycle for water or health care.  In addition I filmed my son set up another X-Change the World program at a different nearby high school run by Africa Schoolhouse.

My Bomb It 2 training prepared me for shooting all of these programs and one more in 2 days – quickly survey the scene and what is happening, identify important characters and don’t stop shooting.   I used essentially the same package as Bomb It 2 except instead of my trusty HV40 – I got my hands on a Canon XA10 – I chose a more traditional video camera for the depth of field – when I’m moving as fast as I am, with my eyes, the depth of field on a DSLR is too critical.  But I have to say on these types of shoots I really miss tape.   I spent a decent amount of time transferring footage and triple backing up instead of sleeping.   Besides the camera and extra batteries – I pretty much only use a lavalier microphone, zoom mic and monopod.

After Ntulya we travelled to Moshi at the base of Mount Kilamanjaro – which because of cloud cover and shooting – I only got to see on the flight out of Moshi!  My favorite project in Moshi was the Gabriella’s Children Rehabilitaition Centre which was established by a physical therapist to treat children with autism and physical and learning disabilities who normally fall through the cracks in Tanzania which struggles to educate children without these challenges.   The teachers were incredible and I loved the chicken and goat house they had just built in their garden as ways to not only be sustainable, but to teach practical vocational and entrepreneurial skills for the children to not just survive, but thrive as adults.

But I’m here at the  Durban International Film Festival where I am giving a talk on Artistic Entrepreneurship and Transmedia as well as mentoring individual film projects.

Here is a link to the Kickstarter campaign for Bomb It 2:  www.bombit2kickstarter.com