What the F is a PMD and Why Do We Need One? 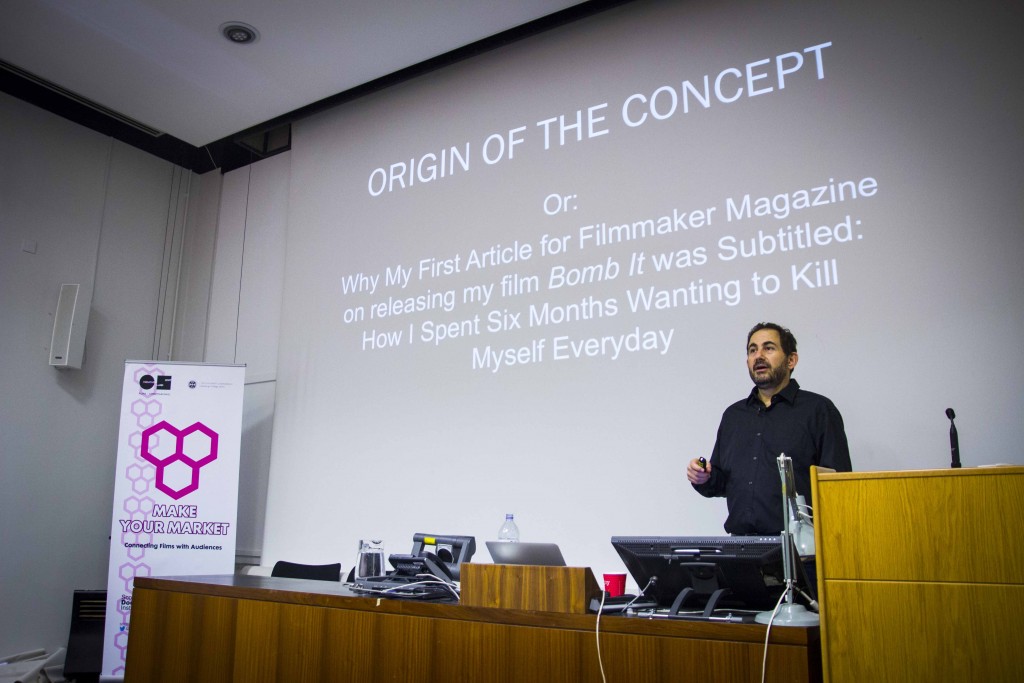 Back in 2010, two weeks before I went to print on Think Outside the Box Office, I coined a new crew position: the Producer ofMarketing and Distribution.   This concept/position has taken off in varying fits and starts over the last five years – with people calling themselves and being credited as PMDs in the United States, Europe and Australia.  A Producer of Marketing and Distribution is the person on a filmmaking team who takes charge of and directs the distribution and marketing process for that film to achieve the filmmaking team’s goals.   It is preferable for a PMD to start as early as possible in the filmmaking process.

The PMD seems to be catching on again.  Why?   Because it is an essential crew position for independent films – in my mind as important as a director of photography.   You can make a film without a DP or a PMD (I have shot some of my films and been my own PMD).   But I think many, if not nearly all films, would be served by having both.

In Think Outside the Box Office I also coined another concept: The New 50/50, in which independent filmmakers need to spend 50% of their time and resources making their film and 50 % of their time and resources connecting their film with an audience, aka distribution and marketing. (To be honest this is not so new – but it was new to independent filmmakers.)

It disturbed me that I was relegating my fellow filmmakers to the physically, emotionally and monetarily draining process of releasing a film after they had already gone through the same while making their film – without help.  (Before the book I had written an article about my experience releasing my film Bomb It and it was subtitled “How I Spent Six Months Wanting to Kill Myself Everyday”)

So I created the PMD.  Five years since writing the book it’s worth taking a look again at why independent filmmakers need a PMD.  Here are my thoughts:

1. Upwards of 98% of independent films do not get traditional all rights distribution deals.  Even with a robust sales market like this year– if the estimates are true that 35,000-50,000 films are produced every year – there is no way that traditional (and non traditional) distributors can handle that volume.  Sundance Artist Services was created in part to help the numerous Sundance films that still had not received distribution after the festival.

2. Some filmmakers do not want to give away or sell all of the rights of their film to one company for a long period of time.  Many companies are doing amazing jobs releasing films – but there are many filmmakers who have become unhappy with how their previous films have been released.

3. Much more common is a split rights scenario where you run the show, you control your film’s destiny.  You can choose the best and most cost effective ways to release and market your film.   But you need to do the work.   Ahhh – But who is the “You”?  Someone needs to coordinate how the rights will work together and make sure that all rights that can be exercised are, in the proper way to achieve the filmmaking team’s goals.

4. There is greater competition for audiences than ever before.  You are competing against nearly every piece of entertainment, writing, art ever created by humankind.   The amount of video uploaded to YouTube every minute is increasing  exponentially.  Three years ago 48 hours of video was uploaded every minute – for a total of 236 YEARS per month.  At last report more than 400 hours is now uploaded every minute, multiplying to 2000 YEARS of content every month!

5. Filmmakers either don’t have the skills to promote and distribute their films or don’t want to.  Granted there are many intrepid filmmakers who are engaging with this process – but even the most notable of these such as Jeanie Finlay has a PMD by her side.

6. Filmmakers don’t have the time to do this work.  Many filmmakers know they need to engage audiences before they have finished their films – or at least start the process – but most say they don’t have time.  On tight budgets most producers are too busy to do this work.  When a film is finished – many of the team either need to, or want to move onto other projects.  Sound familiar?

In working with hundreds of filmmakers over the last couple of years – I have found that very few have the desire, skills, or time to take on the task of being in charge of distributing and marketing their own films – even when they have split rights distribution partners involved.

So this creates a pain point in our world in which there are a lot of films created every year that don’t have anyone to help get it out into the world.  Hence the need.

But things are looking up.  This blog post and the one that follows is taken from a keynote that I gave at the Scottish Documentary Institute’s Make Your Market program in which four films are being paired with two PMDs in training.   I gave a similar presentation at IDFA in November that was packed with Europeans curious as to how this concept can help them as broadcast funding and other forms of traditional distribution drops.   This Sunday I will be on a panel at SXSW with Nick Gonda from Tugg, Jennifer MacArthur from Borderline Media and UK PMD Sally Hodgson.  If you are in Austin come by – and if not and you are interested in becoming a PMD or generally interested in the concept email me at jon@hybridcinema.com

The second post of this series will cover what a PMD is in charge of on a film.

Totbo Twitter Question Winner 2: What Skills Does a PMD Need

From @Jakestetler #dist2010 What skills and/or experience do you look for in a great PMD for a film project?
I chose this because I really love when I see people adopting the PMD concept. I love this because I see this as one of the keys toward helping filmmakers cope with their new responsibilities of distribution and marketing, while understanding that they have a film to make:

A PMD should have good sales and marketing experience, should be a good salesperson, personable, good on the phone, enthusiastic. Those qualities will usually mean that they they most likely have a love of social media and connecting with people on line and in person. Additional good qualities: organized, hard worker, gets stuff done, has an understanding of the distribution world, a good numbers sense.

Alternatively especially on very small films – should posses the qualities the filmmaker does not. Eg if the filmmaker is already a good salesperson but is scattered – a PMD should be organized and focused almost more than anything.

Time to start the PMD Academy. The first step of the PMD Academy will be www.ultimatefilmguides.com. A centralized hub of information and resources about distribution and marketing.